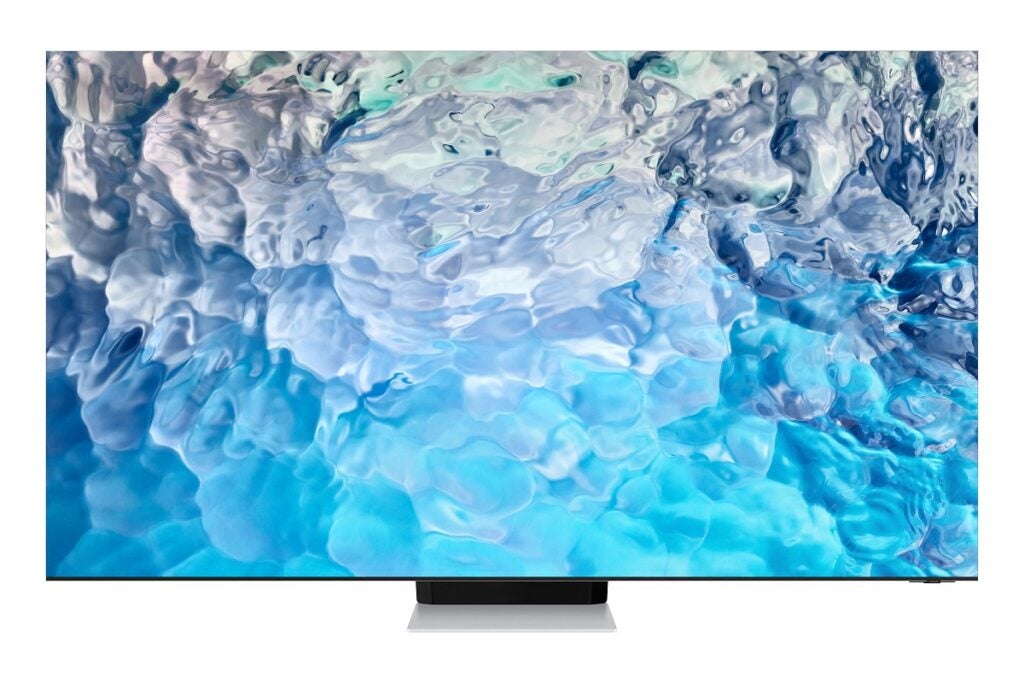 In 2021, Samsung introduced its take on Mini LED TVs to the market, its 8K TVs were its best yet and both its affordable and lifestyle TVs brought more value to living rooms. Let’s not forget their soundbars, which offered the same powerful performance as ever.

But what does Samsung have in store for 2022? Plenty you’d expect and a few surprises, too.

The upcoming Neo QLED Mini LED range looks to extract more brightness and detail from any image fed to it, creating a picture Samsung claims, “looks as though it is taking place before your very eyes”.

How so? The Quantum Matrix backlight works along with the new Shape Adaptive Light technology that uses artificial intelligence to analyse lines, shapes, and surfaces in an image. That information is used to adjust the ‘shape’ of light from the Mini LED, adjusting in real time to enhance the brightness and accuracy of what you see on-screen.

The Neo Quantum processor has been boosted with the addition of multi-intelligent picture technology called Real Depth Enhancer that offers a more three-dimensional image.

Samsung is introducing Smart Calibration on its 4K and 8K models. The TV can be calibrated through the TV’s menu settings or through an app on a smartphone. With a choice of basic or professional modes, the latter takes up to 10 minutes. Samsung says the results are on par with professional calibrators/systems, and it will be made available down to the Q60B model.

Moving over to audio, and Samsung is finally delivering on a ‘true’ Dolby Atmos performance with its new range. The Object Tracking Sound (OTS) Pro system in the flagship QN900V model features upfiring speakers in a 6.2.4 channel, 90W configuration to push audio above the head of the viewer.

Elsewhere, the Human Tracking Sound feature picks up on voices in a soundtrack and positions them exactly where the character is speaking on the screen. This will be available starting from the Q70B model upwards.

Q Symphony jumps to its 2.0 incarnation, with added synchrony between the soundbar and TV speakers leading to a more harmonious performance. Add the capability of wireless Atmos with a compatible soundbar and Samsung is fully immersing itself in, well, immersive audio.

And what about Samsung’s soundbars? The models it mentioned in the briefing we were invited to revealed the new flagship Q950B 11.1.4 channel soundbar and HW-S800B ultra slim soundbar. The slim model is just 1.4 inches wide and 1.5 inches tall, and Samsung say they’ve achieved this slim size without sacrificing power. The compact subwoofer unit uses passive radiators to produce low frequencies, claiming to do so without distortion.

Samsung’s smart hub has been re-engineered to have content curation and discovery front and centre of the experience. Seamless switching between different categories is possible to ensure you don’t have to keep dipping in and out of various menus. If you’re watching linear content, a picture-in-picture screen will pop up so you can always quickly return to what it was you were initially watching.

The gaming area of the new Smart Hub ties together your gaming experiences, with NVIDIA GeForce Now, Stadia and Utomik integrated into the platform. It also keeps track of the games you’ve played as well as displaying recommendations for other games on various platforms.

Samsung is jumping on the group watch train with its Watch Together feature. You and your friends can video chat as you watch the same programme in a manner that’s not unlike BT Sport’s Matchday Experience feature.

Samsung revealed other titbits including information on its Micro LED TVs, but there was no mention of the much-anticipated QD Display TVs. Will it make an appearance at CES? We’ll have confirmation when the event begins on January 5th.