Huawei’s MateStation X is the largest all-in-one PC in the maker’s lineup. It boasts a 28.2-inch IPS LCD touchscreen with 3840 x 2560 pixel resolution with a 3:2 aspect ratio and covers 98% of the P3 color gamut. The device features a metal unibody design and brings a three speaker setup co-engineered with French audio firm Devialet. 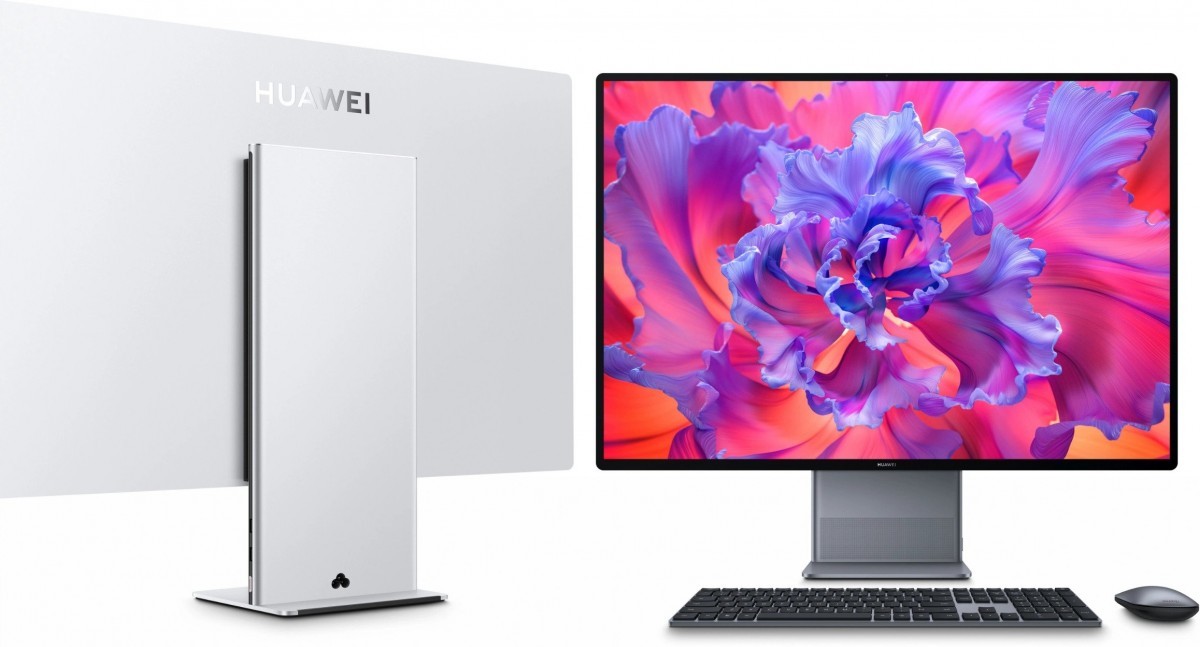 MateStation X comes with AMD Ryzen 5 5600H processor alongside 16GB RAM and 1TB M.2 NVMe storage. I/O consists of two USB-C ports, two USB-A connectors and a headphone jack. You also get Wi-Fi 6 support. Huawei is bundling a wireless keyboard with a built-in fingerprint for authentication as well as a Bluetooth mouse. The software front is covered by Microsoft’s Windows 11.

Huawei’s MatePad family already boasts LCD and OLED screens but it’s now welcoming its first E Ink screen member. MatePad Paper is designed for reading and writing down notes thanks to its 10.3-inch E Ink display with smart refresh technology but it’s also a fully-fledged tablet. The advantages over traditional LCD and AMOLED tablets here is most evident in direct sunlight where the E Ink display remains perfectly legible. It comes with a special anti-glare layer on top and supports 32 levels of brightness which lets you read in darker environments without any issues. 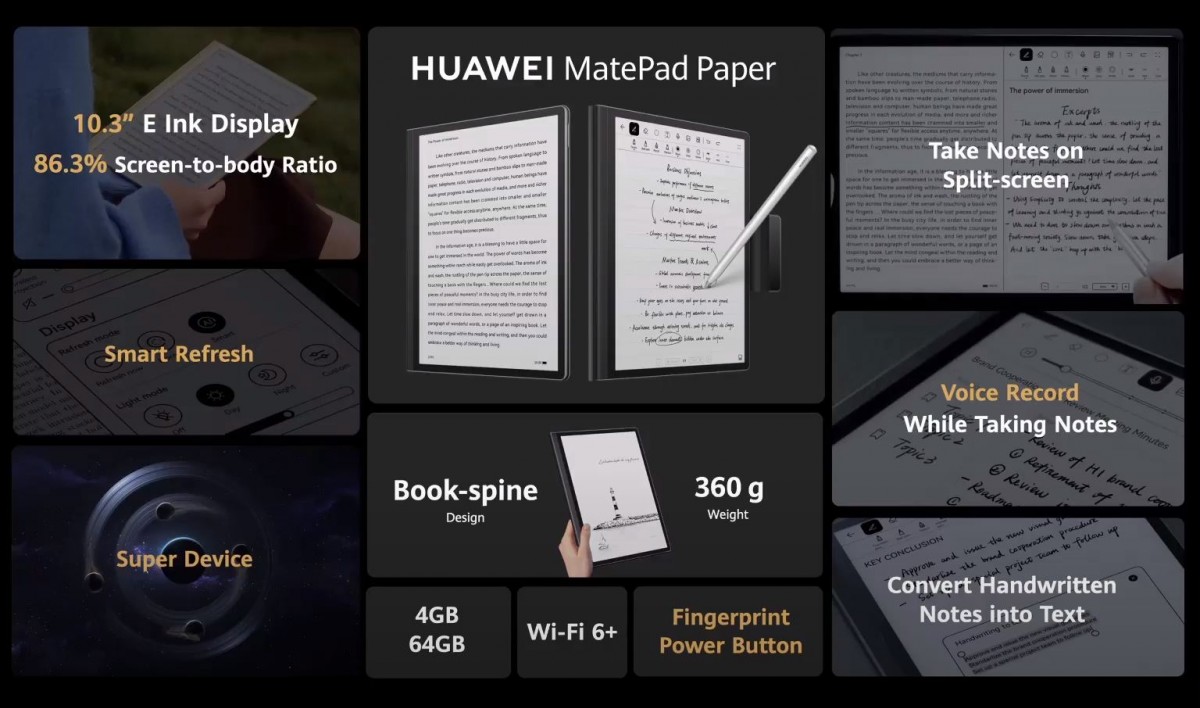 Huawei also boasts the advantages of MatePad Paper’s large screen real-estate compared to traditional e-readers – you get a more spacious display area that fits more text and requires less page-turning. Huawei’s software team developed a smart refresh mode for the MatePad paper which lets you play videos, browse the web and navigate the interface faster than other E Ink displays. 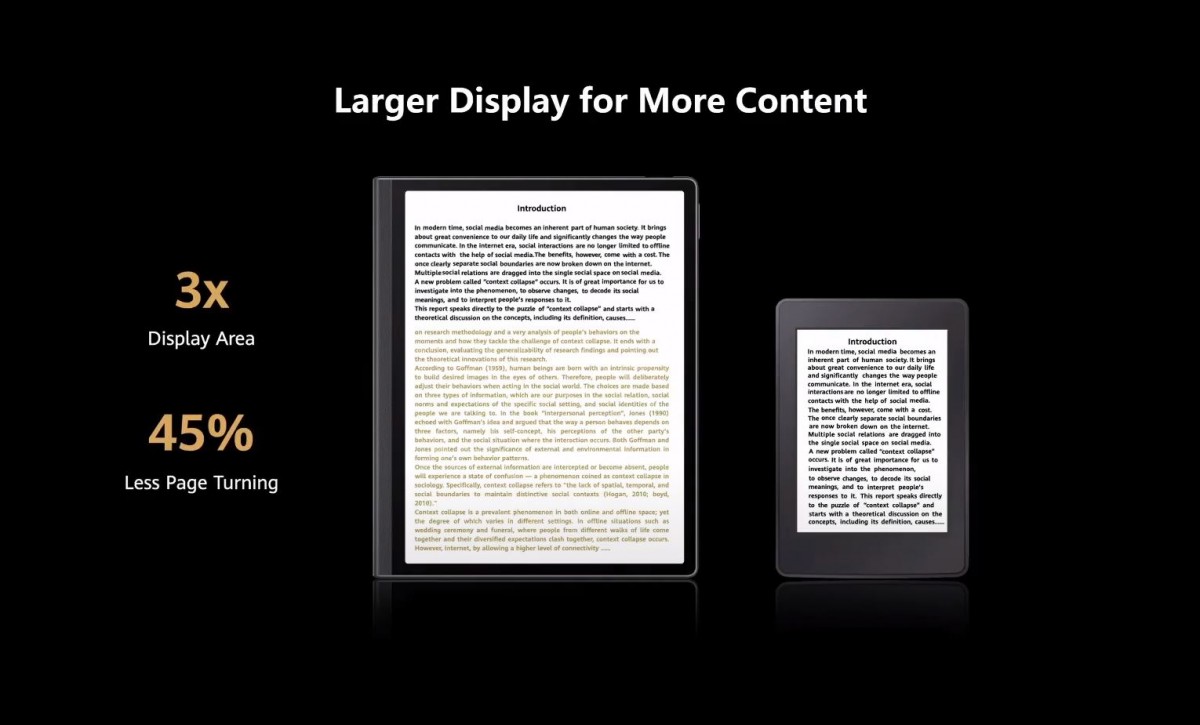 MatePad Paper supports Huawei’s second-gen M-Pencil stylus with the same 4096 pressure sensitivity levels. Huawei is claiming 26ms latency here. The screen on the tablet is also of the PMMA variety which adds a textured feel and should feel more natural to write and draw on. You can take split screen notes with a textbook on one side and the notes app on the other.

MatePad Paper runs a custom version of HarmonyOS 2.0 and supports smart content transfer from Huawei phones. It boasts 4GB RAM and 64GB storage ,Wi-Fi 6+ and a fingerprint sensor integrated in the power button. Huawei claims it can last up to four weeks on standby. The tablet weighs 360 grams and comes in black, khaki and blue colors.

The Huawei MateStation X will cost €2,199 in Europe. Meanwhile, the MatePad Paper will be €499, and Huawei will bundle it with an M-Pencil and a Folio Cover.