Synopsis: Betty Scarpino’s turned pieces are explorations of what lies beneath the surface. First she turns, then she cuts the pieces apart, carving, texturing, and reassembling the parts. Her work has earned attention throughout the world. In fact, not long ago it earned her a trip to China that invigorated her career and her life.

As a wood sculptor, Betty Scarpino is interested in going beneath the surface to find the beauty that lies within. She turns objects on the lathe and cuts them apart—carving, texturing, and reassembling the parts. The exploration beneath the surface mirrors Scarpino’s inward journey as she creates. “When I work I feel like I’m connecting with some sort of universal creative energy,” she said, “and I need to let my mind get out of the way. If I start thinking I want it to be this or that, it gets in the way of channeling that energy straight into my hands and the wood.”

While collectors and writers have commented on common themes in Scarpino’s work—such as masculine and feminine archetypes and the yin-yang symbol—she says, “I often miss things in my work that other people point out or I notice only later.”

Moving on is part of the process. “Then I just turn another piece and do something different,” she said. “If something doesn’t work, I set it aside. Sometimes I come back to it later, even years later. Some pieces are just more interesting than others.”

An inward search for meaning and truth is also reflected in Scarpino’s career path. “I didn’t set out to do this stuff,” she says. “I took a woodworking class because it looked like fun, and I liked working with my hands.”

That class led to her majoring in industrial arts at the University of Missouri, and subsequently to the fine arts department, where she was immediately attracted to sculpture.

When she asked the sculpture instructor, Don Bartlett, about taking classes, he said he had tried before to have industrial-art students come over and take sculpture classes, but it didn’t work out because the students had no background in art.

So Scarpino took all of the prerequisite art classes Bartlett suggested. “It turned out that he was right: I didn’t know about line or form or any of that.”

Her first sculpture assignment was to make an abstract bust using only cones and cylinders. Bartlett placed hers last in the row of best to worst, his uncompromising way of grading assignments. “But a light bulb went off for me,” Scarpino said. “I got it.”

On her next assignment, to sculpt a classical nude based on a live model, Bartlett spent more and more time with Scarpino as she worked, giving tips and suggesting refinements. “This time, my work was at the other end of the row, ahead of his graduate students,” she said.

Seeing an unused lathe in the back of the craft studio, she asked Bartlett about making sculpture from turned pieces. “He said it wasn’t possible,” she recalls. “‘Everything that comes off that is round,’ he said.” She learned to use the lathe, but didn’t use it for sculpture.

Years later, at a 1994 workshop taught by Michael Hosaluk at Arrowmont School of Arts and Crafts in Tennessee, Scarpino created her first lathe-based sculptural object, cutting apart and carving a wood turning. Setting up shop in her garage soon after, she began turning out the pieces that have earned her renown in both the woodworking and art worlds.

The person behind the piece

Scarpino credits her time with fellow artists—at exhibitions and symposiums— with showing her what was possible and inspiring her to dig deeper. It also showed her a way she could give back to the craft. “I remember my first woodworking symposium, outside Seattle,” she said. “It was my first immersion into the wider world of wood turning, and I sat on a bench overwhelmed with what turners were doing and showing.”

The way demonstrators talked about their work was striking, too. “When guys presented themselves, it was all about the work, and they acted like they had done everything on their own. But there was a woman who was a production turner doing architectural work, and she talked a bit about her personal story and her family,” Scarpino recalled. “That meant something to me.”

After that experience, she began to share more about her life when she presented work. At a 1996 conference, while talking about “In Lieu of Housework,” an altered plate, Scarpino included a few slides of her family, explaining that she was able to get much more done when her husband and kids were away on a trip. That revelation connected with several women in the audience, one of whom came up afterward and said, “I didn’t know you were married and had kids.” 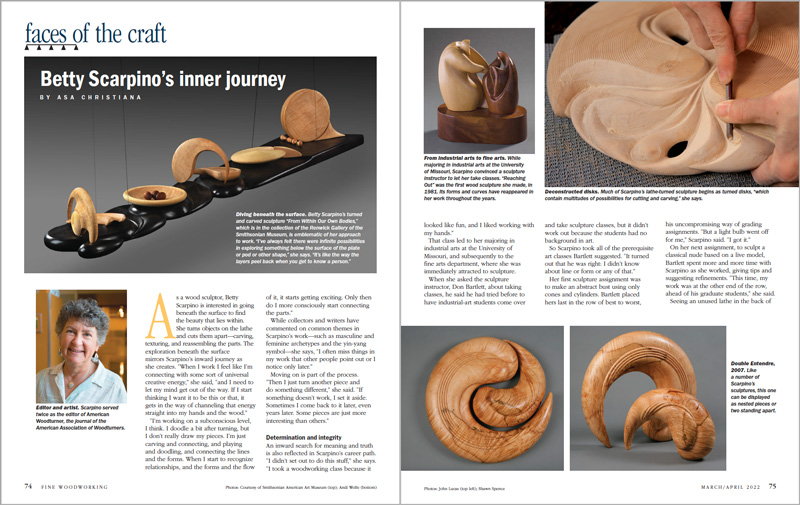 To view the entire article, please click the View PDF button below.

Sign up for eletters today and get the latest techniques and how-to from Fine Woodworking, plus special offers.

Get woodworking tips, expert advice and special offers in your inbox

when you enter your email address below.

AHFA 2022 Summit Is Two Events in One