Best Perks For Superman In MultiVersus 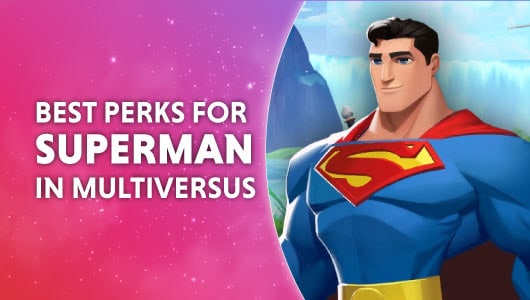 In this guide, we’ll recommend you the best perks for Superman in MultiVersus.

Being one of the most helpful heroes of all time, Superman has a plethora of attacks and abilities in his arsenal.

Superman’s abilities can come across as overpowered.

However perks can provide some stability in the character which also match well with the characters’ kit and play style.

Best Perks for Superman in MultiVersus

Here’s our recommended best perks for Superman in MultiVersus:

More perks can be unlocked once you level up Superman even further. Further perks to unlock include:

Using triple jump however may be redundant for Superman’s hit as… he can fly.

NOW READ: Enjoy Shaggy? See his best perks to curate the best build around him!

The best perks that are mandatory is Flaming Re-entry and Kryptonian Skin as a base for Superman builds.

NOW READ: MultiVersus Season One – What you need to know

Interested in MultiVersus? These pages may be of interest to you if you’ve enjoyed playing the Warner Bros arena fighter!

We’ll see how stronger Superman gets once Season One gets underway and if he’ll receive a buff or nerf, however that’s looking unlikely currently as Season One has been delayed! There is no indication for a further release date at the moment.

NOW READ: Enjoying MultiVersus and interested in Season One? Get the scoop for everything we know at the moment!

Pixsy: "No data was breached, but still change your password"